What's In a Name? Part Two

This conversation occurred a few hours after Part One.

What's In a Name?

M: "Mommy! L keeps calling me things I don't like!"
Mommy (thinking these must be offensive names): "Like what?"
M: "Curious George and Peanut and M!"
(M is his given name and the other 2 are standard nicknames)
Mommy: "Well, what should he call you?"
M (highly annoyed): "Super Sonic and Batman and all the other stuff I made up!"

Posted by The Classical Circus at 12:58 PM No comments: 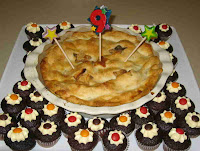 L turned 9 on Wednesday. He wanted an apple pie for his birthday, but when he decided to invite a family from church over to help him celebrate his day I decided to make mini cupcakes (or pupcakes as M calls them) just in case 1 apple pie wasn't enough for 12 people. 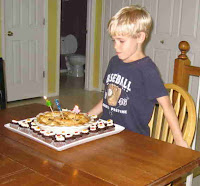 He requested a simple breakfast of Quaker Chewy Granola Bars, McDonald's for lunch (Cr came home and ate with us), and Little Ceasar's Pizza for dinner. Our friends came over to celebrate and we had a wonderful evening getting to know them better while all of the kids played.

He spent the day with his brothers having a Star Wars movie marathon (I think they watched 3 total). His day ended playing Lego Star Wars on the Wii. He also received 2 Lego Star Wars kits, a cap rifle & pistol, a bow and arrow (one to pretend with-not a real one), a pair of handcuffs (again, pretend-while I was willing to get him a real beginner bow and arrow, I would not get him a pair of real handcuffs. Ever.), and a backyard baseball set (now he won't have to come in and try to talk me into giving him plates for bases).

And yes, in the picture of L blowing out the candles, you can see one of our toilets in the background. Nice, huh?
Posted by The Classical Circus at 8:42 AM 1 comment: 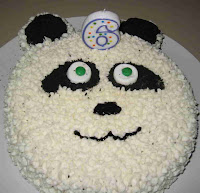 J turned 6 at the end of June. He requested a Kung Fu Panda Bear theme (he refused to leave the "bear" off the end). To celebrate his day he decided to take us all to the theater to see Kung Fu Panda which was a really cute movie that we all enjoyed.

He requested a Slip N Slide and a Water Sprinkler for his birthday. He received both, but it was too cold to use them on his birthday. It was cloudy, somewhat rainy, and the high was only in the 60s.

He also received a Kung Fu Panda bear stuffed animal and book, a gamecube Hobbit game, a watering can, a watch and a rebound net for baseball.

For his birthday breakfast he picked overnight apple french toast, he enjoyed his chicken nuggets from McDonald's for lunch, and for dinner he requested grilled hamburgers.

I look forward to watching him spread his wings more this year (even though he's growing up way too fast). He's such a sweet, funny little boy.
Posted by The Classical Circus at 8:36 AM 1 comment:

Okay, so maybe, just maybe there is a small bit of truth when my Mom tells me I don't actually have a baby anymore.

Last night Cr was sitting on the floor, wrestling with the dogs and boys. N walked up to him, sat down right in front of him with his legs sticking and said:

"Daddy? Can I talk you fora minute? I hurt my leg."

Hrmph. Seems he's going to grow up whether I approve or not.
Posted by The Classical Circus at 9:21 AM 1 comment:

Further Proof I Still Have a Baby

When Life Gives You Lemons

Two weeks ago we went to a buffet for dinner. The boys had coupons to get in free, thanks to the library summer reading program.

All of the sudden, M was overcome with a question. This boy is passionate, and the more passionate he is about what he's saying the louder he becomes. And the more repetative he becomes until he gets an answer or confirmation that he's been heard. And he still pronounces "L" as "W".

I was drinking water and was trying not to laugh so I couldn't swallow to answer his question. Cr couldn't understand what he was trying to say. So M repeated this question probably 10 times before I could answer that yes, indeed, his Dad had a lot of lemonade.
Posted by The Classical Circus at 10:54 AM 2 comments: 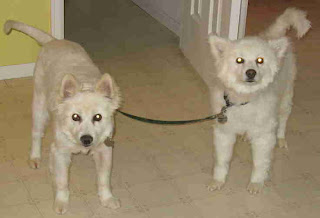 Cr & I noticed that Maggie and Chewy were scratching a lot. We realized they had fleas, most likely picked up while being boarded at the end of May. I decided to give them a bath with flea shampoo yesterday, thinking I'd finish quickly and be able to move on to the other chores I had planned for the day.

I bathed them, but while bathing Chewy I realized how bad the fleas were. They are American Eskimo dogs, and have really thick fur, and I came to the conclusion the only hope I had to actually get the shampoo down to their skin would be to shave them.

I started with the first bath at about 9:15, and decided to shave them by 9:45. I finished shaving Chewy at 12:30. I figured I'd have lunch, then shave Maggie and be done by 2:30 or so, and have some time to get other things done. It turns out, however, that Maggie's coat is much finer and softer than Chewy's, which means I couldn't shave it down with a guard on the clippers. In addition to looking like she has the mange now, it also took my until 4:00 to finish, and then I had to give each another bath in the flea shampoo.

The only bright spot I could think of while I was working on them yesterday was "At least the boys don't have head lice".
Posted by The Classical Circus at 6:03 AM 2 comments:

All of the boys need a bath. They are sticky and icky and well...kind of stinky.

N climbed up in my lap, and I was kissing on him.

My Mom likes to point out I don't have a baby anymore, but I'm still claiming him as my baby and he agrees with me. Just the other day I was carrying him up to bed for his nap and he told me "I you baby, Mom. I you baby". Who am I to argue with that bit of cuteness?
Posted by The Classical Circus at 7:10 PM 1 comment: 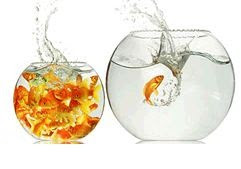